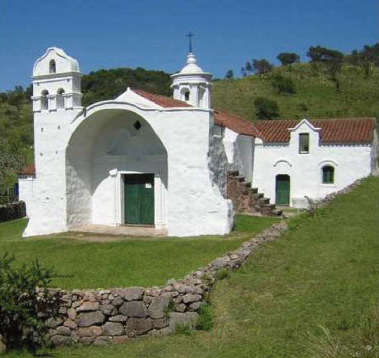 The following story is the series of magical occurrences that have taken place in my life because of Mandalas. This personal experience may inspire others, sparking interest in this millennial art that can help each and every one of us in the next steps of our lives.

One day, my friend Virginia spoke to me of Candonga, a very special place in Córdoba close to Salsipuedes. Her stories intrigued me, and I decided to find out more about the location. Virginia then gave me the phone number of a woman named Susana, the owner of a country home there. I called her immediately and spoke with her for a long time, telling her that I had recently begun to create self-adhesive Mandalas to be placed in the windows of offices, spaces of meditation, homes, cars, etc. A Mandala brought to me from Australia had helped me to overcome a difficult emotional situation in my life, and I hoped that my Mandalas would do the same for others. I aspired to provide centering and harmony, reminding others of the beauty and wisdom that reside within us.

Susana was surprised, for she had a book about Mandalas in her hands at that very moment that she was planning on sending to a friend in Mexico with health problems. When we said goodbye, agreeing that I would go to visit her, she asked me if I could bring with me a person who often visited her (who usually went in her own vehicle but on this specific occasion could not). I said yes, and she gave me the phone number of a woman named Rosa María. I spoke with Rosa María a few days later to organize our departure for Córdoba. Some friends of mine, with their son, decided to come along as well.

The trip was harmonious and enjoyable. We laughed a lot, talking about various subjects and eating delicious food. Moments of when to stop and questions of what to do emerged from a sort of dance of implicit agreement that rendered the duration of the journey both relaxing and fun.

I told my fellow travelers that I had reserved an apartment I liked very much to move into with my children. This was a big step for my family after my separation from my husband.

The first time I stepped into the apartment, I felt that it was the place for my family. The real estate operation had not been easy – my reservation would have to be accepted by twelve inheritors, and a prior down-payment that had been made a year before had recently been aborted after several complications.

I found out about the sale by pure chance. A year before, I had looked into a property in the building of my eventual apartment. Simply standing in the surrounding patio, I knew I wanted to live there. I was told that it was not easy to obtain an apartment as owners often waited to buy before selling in order to make the investment. After several months, I passed by the building with my daughter to give her an idea of what I had in mind for our future living situation.
As I parked the car in front of the gate, she told me that the grandmother of one of her good friends lived there. “I think her grandmother sells apartment here,” she continued. Weeks later, I spoke with the woman, who told me that she did not currently have any places for sale but that she would let me know if something came up. About seven months later, after the summer had passed, she called me to tell me about the cancellation of the reservation of a previously interested buyer of an apartment and offered to show it to me. As soon as I walked into the space, I knew it was where I wanted to live.

After telling my fellow travelers about the reservation and the way I had arrived at the apartment, I told them the story of the previous owner. She was a very ambitious woman with a lot of character and elegance who had died two years earlier. The woman had also been the owner of Bambi, a well-known Buenos Aires restaurant. Rosa María then mentioned that the same woman had sold her the building that now housed her publishing agency on Santa Fe Avenue.

Such coincidence convinced me that the apartment would be a new home for my children and me. I did not need to do anything else to obtain it. Soon after, I moved in.

When we finally got to Córdoba, Rosa María and I shared a cabin, getting to know each other better. When going for a drive one day, we spoke of my projects. She directed a cultural center, and my plans happened to coincide with something she had been seeking for her center for a long time. One of my ideas was to produce a daily planner with Mandalas to color and draw. After the trip, Rosa María asked me to meet with a director and a sales manager of her publishing agency to present my idea.

Everything happened naturally. The night before my trip to Candonga, I had spoken with the aunt of a friend of my son who I had met a few days earlier. Without knowing why, I told her about my dream of making planners with Mandalas. I then discovered that the idea was something she was working on as well. She had worked in publishing for more than twenty years, and she sold quality books for children outside of Argentina.

When I returned from my trip, I knew the what, why, who and how of my planner project. I also decided to commence a larger venture related to Mandalas.
Soon the pages of Mandalas being produced began to be sold in a store named Ki, which belongs to the Editorial Kier.

The directors of the publishing agency decided to begin by printing 3000 copies of the 2007 Los Mandalas Daily Planner. The planners were a success and soon were being sold at some of the biggest, most popular bookstores in the city. In 2008, 10,000 editions were printed to be sold in America and Spain. Sales were so strong that year that in 2009 we plan to print 12,000 copies.

The release of the 2007 planner coincided with the 100-year anniversary of the publishing agency. In its booth at the annual Feria del Libro (Book Fair), the planner was featured along with other books and offered international suppliers and visitors. In several Buenos Aires bookstores, the planner was placed in front of other similar products. Some sales people even said that the Los Mandalas planners sold like hot cakes.

I personally had decided a long time ago to live without pushing things even if I had experienced positive results in the past. The sensations and exhaustion with which such insistence left me has never been worth what has eventually been obtained. I found that before making this decision, I had always missed out on enjoying the journey.
I believe that our intentions guide occurrences. Being aware of the happenings that dance with what our souls really want and need to keep growing is what gives life a special and magical sense.

Year after year, my desire to be able to bring others closer to the magic of Mandalas grows more and more. Beyond the diversity of the products and services currently offered by Los Mandalas, this venture has allowed me to meet very special people – artists, therapists, friends, etc. These people accompany me on this journey that began as a dream and that has resulted in a reality more marvelous than I had even imagined.

I send the warmest greetings to those who wish to receive this message,